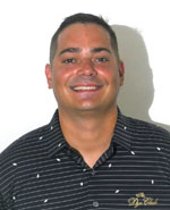 As a Grand Strand transplant, Michael Tavik has the knowledge to guide you to your next dream real estate purchase. Michael originally hails from Baltimore County Maryland, from where he moved and decided to make North Myrtle Beach home in 2016. He became interested in turning the beach into his home while playing in annual golf tournaments with his father starting in 2005, as well as making regular visits to see relatives.

Michael attended the University of Baltimore, where he focused his studies in finance. This led him to several sales positions up and down the east coast. He also has a strong background in the hospitality industry which shows in his service-oriented approach to real estate. He began being interested in pursuing real estate from the influence of his parents. His mother Angie is also an agent in the company.

In his free time, Michael enjoys trying out the local golf courses and learning more about the area to which he calls home. He is also an avid foodie who enjoys doing research at many local eateries.

Michael is a fresh face in the real estate world eager to make your dreams a reality. Contact him today.